I have a strong dislike of mangaka who dismiss putting any effort into creating backgrounds and settings for their stories. Our environment shapes us, so why should stories and the lives of their characters be any different? I believe comics should consist more of just heads talking to each other. At least if there’s any illusion of depth. So it’s rather sad, but I get overly excited when I see someone create a well-structured, detailed backdrop for their stories. I’ve been obsessively reading the works of Aoike Yasuko, particularly Eroica Yori Ai wo Komete, for a while now. Eroica is a manga that focuses on a world-class art thief and a NATO intellgience officer, so naturally, there’s a lot of globe trotting. They travel to so many different countries and Aoike always manages to make sure you’re actually aware of that. The setting is different and spiced with her characteristic hint of comical stereotypes that seamlessly blend with the manga’s tone. So I knew Aoike was no stranger to creating detailed, varied settings. But that still didn’t prepare me for her maritime story set during the Napoleonic Wars, Trafalgar.

END_OF_DOCUMENT_TOKEN_TO_BE_REPLACED

On 10/14, Aoike Yasuko will release Z Complete Edition, which is a full collection of Agent Z’s short stories and will include numerous color pages.  Z is a minor character from Eroica Yori Ai wo Komete.  He’s an earnest, hard-working, and capable rookie agent that even the picky Major favors.  Z’s own spin-off stories were originally published from 1979 to 1985 (her style’s golden years, btw!) and collected into two volumes of manga.  The stories tend to be more serious than the main Eroica storyline. 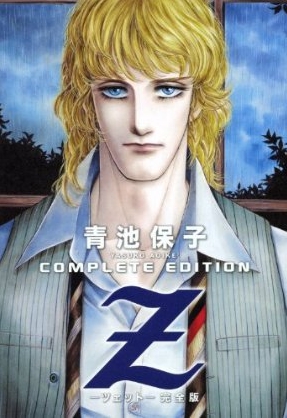 With the revival, Aoike herself even remarked in her blog that it will allow readers to (once again) experience some of her great years. With a price tag of 1680 yen, it must be one hell of a high quality, collectable edition!  I held off on buying the originals/earlier reprints of Z since there was news of this complete edition and I’m glad I waited.  Now that the date is announced, looks like my next manga order cut-off date is decided!

Lots of Aoike Yasuko to read

My Eroica set scheme worked–I got Eroica 1-37 in new condition.  They’ve been actively reprinting them.  My volume 1 copy is from the 59th printing, haha.  That’s great she’s seen enough success over the years to warrant that.  First editions aren’t important to me over manga in good condition. :3

I posted over a dozen select cover and back cover scans to my tumblr.  Actually, I’ve spammed a number of Eroica images this past month, so check the archive if you’re interested. There’s more images under the cut that illustrate the high quality of the 3 hardback books in the bottom row.  They all have multiple color pages and are made from high quality paper/materials.  I’m quite impressed and even met my new manga crush.