Minekura Kazuya’s fabulously hard-boiled series Wild Adapter is going to be re-released by the publisher Ichijinsha.  There’s a teaser site open with more info to come later.  All volumes will have new covers and there will be limited editions that contain drama CDs.  The cast is the same as before with Morikawa Toshiyuki and Ishikawa Hideo.  These mini-dramas will contain new scenarios written by Minekura specially for this release. 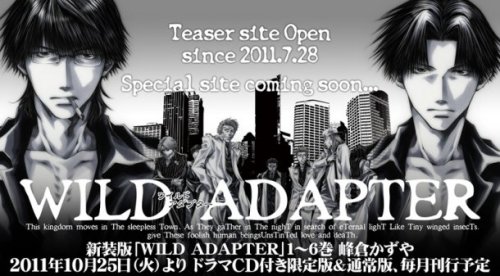 Wild Adapter was serialized in Chara, but has been on hiatus for some time.  The bi-monthly release schedule, Minekura’s poor health, and rumors of “creative differences” between her and Chara weren’t helping things. Notice that this means Wild Adapter has switched publishers.  So, while it doesn’t explicitly state it (yet)… hopefully that means we’ll see its serialization resume soon!  Pleasepleaseplease.  I can’t beg enough. This means I’m going to have to rebuy yet another Minekura series.  But I love Minekura’s work and Wild Adapter has always been my favorite (and the cruel breaker of my heart due to its hiatus), so I’ll do so gladly.

On July 25th, Minekura Kazuya will release a short story collection of her work, Hachi no Su.  Two editions will be available, including a limited edition that comes with a drama CD.

Hachi no Su is about two men who take care of the dead.  In a world rife with black market organ harvesting and sales, the dead are often given no respect and preyed upon.  The main characters are two not-so-ordinary government workers who prevent that by collecting the dead before they are snatched away.  Sometimes the job gets a bit.. difficult.  One man is a glorious, grizzled oyaji, which makes it even better.  While the content deals with death and has some weight, it’s not overbearing or overly dark–it reminds me a lot of Kurosagi Shitai Takuhaibin.

I’ve been a huge fan of Minekura Kazuya for over a decade now.  That in itself is amazing–I usually fall out of love with mangaka over time, but she consistently makes characters that I can’t help but love.  Given her serious health issues over the years and its sporadic (at best) publication, I wasn’t sure if/when Hachi no Su would be released in tankoubon form.  On the other hand, due to the fact it’s an episodic story, I’m a bit sad that this also is a likely sign that Hachi no Su will be utterly discontinued like Bus Gamer.  Not that it had been publishing recently, but it’s the final nail in the coffin, so to speak.  Hachi no Su had so much promise.  Regardless, I’ll be buying this volume and happily setting it next to her other 64 books I own.