Here’s another update to the Oyaji BL Manga Primer with some long overdue additions. These short updates make it much easier to handle that big entry.  Unfortunately, there’s only two entries so far under the “bad boy” oyaji, but they are two great ones and I couldn’t leave it be.  I forgot how much I enjoyed Division. 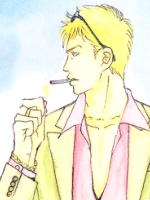 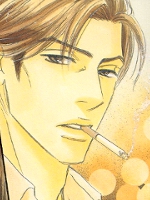 Division by Nishida Higashi
Tanaka is one of Nishida Higashi’s bad boys, as evidenced by his elaborate back tattoo and missing pinkie.  Desperate and on the run in a foreign country, an innocent lawyer latches onto Tanaka, for better or worse.  Tanaka is cunning, but unstable and unpredictable.  On a whim, he might help you out. On a different whim, he might leave you to be gang-raped.  One minute he’s smiling and calmly eating dinner, the next he’s stabbing a guy in the hand with a fork while laughing his ass off.  Despite that (or because of it?), there’s still something thrilling about Tanaka that attracts the other man (being stranded in hostile territory with no language skills probably helps).  Ever had a psycho boyfriend?  He’s got nothing on this oyaji.

Aiso Tsukashi by Yamada Yugi
Previously a side character in Takaga Koi Daro, Sawaragi gets his own love story in Aiso Tsukashi.  Sawaragi is a former yakuza who was recently released from prison.  He decided to leave that part of his life behind until a former inmate, Shuuya, shows up on his doorstop with nowhere else to go.  Sawaragi is the strong, silent type, but has a soft spot for lost kittens, both the furry and human kind, and reluctantly takes in Shuuya. Yamada Yugi oyaji are always great.  There’s more oyaji scattered throughout her oneshot collections.

Saka no Ue no Mahoutsukai by Meiji Kanako
Lee is a magician who is much older than he looks (and he still falls within oyaji range!). Normally serious and somber, Lee seems particularly world-weary due to past circumstances, but there’s a young apprentice to keep his cottage bouncing with curious energy. Lee lives a rather austere, simple life for a powerful wizard and mostly keeps to himself.  However, others seek him out, including many magical beings, other wizards (not all friendly), and even royalty. Meiji Kanako has numerous older men in her manga–just make sure you’re familiar with her odd style before plunging in!

Hana wa Saku ka by Hidaka Shoko
Sakurai works long hours at an advertising agency and doesn’t have much time for anything else.  Nothing else even seems worthy of his attention or motivation–until he meets a younger artist.  Sakurai is an adult–practical and level-headed. He doesn’t blindly fall into love/lust, but can’t deny there’s something there and must work up the courage to pursue it. A beautiful love story for a beautiful man.

Here’s some brief glimpses at two titles that recently left an impression. 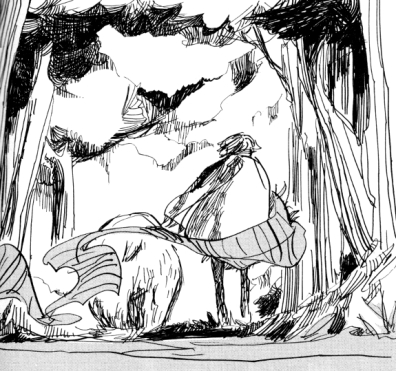 END_OF_DOCUMENT_TOKEN_TO_BE_REPLACED

I consider myself an advocate of the delicious oyaji.  At least advocate sounds better than raving fangirl madly attempting to brainwash others. *ahem* As a follow-up to my oyaji BL manga primer, here’s a selection of great romance manga featuring older men.  Romance for adults.  Not necessarily the naughty kind, but the grown-up kind.

You’ll notice this list is much smaller, especially since I went ahead and independently covered a number of the titles.  Unfortunately, romancing older men isn’t a terribly common theme, at least not as the main focus of a manga. I don’t use the label “romance” lightly.  A genuine, powerful draw between two characters must be the main focus to make this list.  So here’s a selection of my favorite titles featuring an oyaji in a romantic story within some selected shoujo, josei, seinen, and BL manga.

END_OF_DOCUMENT_TOKEN_TO_BE_REPLACED

At some point, you get tired of reading manga about 16 year old kids.  You crave something different.  The further you get away from age 16, the more prominent this feeling can become.  Thankfully, there’s a trend within BL that gives us some grown, adult men and it’s been growing in popularity:  the oyaji!

“Oyaji” literally means father, but is also casually used to refer to middle-aged men. The lower age limit to qualify as an oyaji is typically early 30’s.  Common oyaji “cues” include visible signs of age like wrinkles around the eyes and mouth, an established family, and, of course, crotchety old man behavior (my favorite).   Within manga, there’s certain character types associated with this term.  The majority of oyaji seem to fall within the 30-45 year old range, particularly for BL.

First, if you’re completely new to this subgenre, here are some of the most highly regarded mangaka that reliably produce fantastic older men.  Their works are a great place to start and are relatively well-known, so I’ll only briefly mention a few of their relevant works.

This would be best titled “shin’s Oyaji BL Primer” because it isn’t all inclusive (too much!) and I’m blatantly playing favorites.  Hey, what can I say–it’s my blog and I think I have decent taste in oyaji. ♥ I’m not including everything, as I’d actually like to finish this list at some point (yet I know I’ll add to it later).  So this will be an overly large manga snippets post describing my favorite oyaji within those works.  And boy do I love my oyaji.

So here’s some hand-picked BL works that I’ve enjoyed which feature an older man, whether top, bottom, in the middle, on the side… I don’t discriminate!