I’m a bit smitten with Murakami Takashi’s style (points to blog header), so I’m ecstatic that Paji is getting a reprint with a ridiculously adorable cover.

Momo is a 4 year old girl who lost both her parents.  She now lives with her grandfather, who she calls “Paji.”  Paji is shortened from a phrase (パパ代わりのおじいちゃん) which just says he’s a substitute father (Papa+Ojii-chan=Paji).  The story is about their simple, but warm life together in their friendly neighborhood.  It’s supposed to be a very “human” story.  Considering his ability to make good slice of life manga (which I normally steer clear of), I believe it.

This reprint is a compilation of the “best” material from the original 9 volumes that were published from 1999-2004.  There will also be an original story, new illustrations, and afterword included.

A story for people who love both dogs and life. 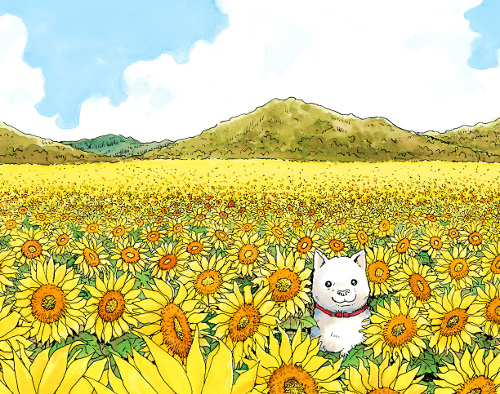 Hoshi Mamoru Inu begins at the end.  A man’s corpse is discovered in a rusted station wagon, left to decay untouched for a year.  Nestled below that body was a smaller, less decayed form.  It was a dog that had been dead for  only about 3 months.  What led these two to this journey’s end?