The Jack and Elena Stories by Shimizu Reiko

With this blog’s one year anniversary, I want to uphold my tradition of putting lots of effort into things no else cares about, so let’s talk about some older shoujo manga by Shimizu Reiko! The depth and variety of her work represent a golden age of shoujo manga to me:  the mid-80’s to mid-90’s.  There was a lot of freedom and creativity and classics like Tokyo Babylon, Banana Fish, Boku no Chikyuu wo Mamotte, and more were born.  One of my favorite (now all but extinct) movements in shoujo manga was the creation of vast, imaginative worlds within sci-fi stories by mangaka like Hagio Moto, Hiwatari Saki, and Shimizu Reiko.  Within these examples, Shimizu Reiko wrote some of my favorite shoujo stories ever about two robots, Jack and Elena.

Featured in multiple manga, Jack and Elena are highly functioning androids who couldn’t be more different, yet complement each other perfectly.  Jack is nearly indistinguishable from normal human beings, to the point he wasn’t aware of his own nature at first.  Jack is what shoujo lacks these days:  a handsome, older male lead who is not perfect, not an asshole, and not a bumbling fool.  He’s kind and good-natured at heart, but level-headed and capable.  He’s a gentleman that cares for others and is one of the most human characters I’ve seen to date.  Yes, even though he’s technically a robot.   In fact, these robots offer some of the most genuine glimpses of human nature that I’ve encountered in shoujo manga.

END_OF_DOCUMENT_TOKEN_TO_BE_REPLACED

I just can’t keep up with writing an entry for every great thing I want to mention.  My career keeps me very busy and it’s only going to get worse.  It’s frustrating.  Instead of letting everything die, I need a more sustainable approach.  So in addition to the occasional previews, I’m trying a new format:  a monthly (?) recommendation list.

Ten manga of varying vintage and demographics/genres will be picked.  The titles will likely range from obscure to moderately known.  Expect both raw and translated works.  Basically whatever catches my fancy.  At least one pick will be a title I want to write a full entry for, but may never get a chance to do so.  Others will be works that recently left a very positive impression on me.  Others will be older titles that I enjoy and think others should as well.

To keep it workable, I’ll only list a small amount of general info.  Genres/demographic will be specified, along with my own “important to me” manga types, and a few brief points for each title.  As usual, I’m opinionated as it keeps things interesting, so deal or leave~  If a title catches your eye, it’s up to you to seek it out!  Buying it is the most likely answer–radical idea, I know. 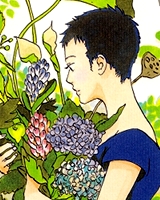