I recently purchased several new bookcases. With all the new space, I rearranged almost all the manga I own. After being over capacity for months, I’m amazed at all the extra space and snapped a few pictures.

This set is completely new. The bookcases are just the Billy bookcases from Ikea. They blend in decently with my older birch bookcases. For the first time ever, I was able to get all of my Hana to Yume manga in the same place (besides any I have packed away from before). Various other shoujo manga imprints/publishers like Ribon, Asuka, Wings, Kodansha, and Margaret have some space. There’s also author dedicated shelves, including Morinaga Ai, Yuki Kaori, Shimizu Reiko, and Mizushiro Setona.

My favorite thing here is the author cubbies–I have individual cubbies for Nishi Keiko, Nakamura Asumiko, Yamashita Tomoko, Bikke, and est em and Ono Natsume share a space. I usually have entire shelves dedicated to authors, but there weren’t enough books from each of these mangaka to follow that system. The small cubbies are great. I also needed more space for large artbooks and have a few select doujinshi stashed at the bottom.

I also have a thing where I like to decorate manga filled shelves with similar themed items, so I dug around for any pictures I could put in a simple frame. I’ve been wanting to display that Seishirou postcard for a long time. I bought the Tokyo Babylon postcard collection cheap from jpqueen years back and finally decided to dig into it. I’ll probably display another postcard or two from it, but they aren’t monochrome and I feel like they need a boldly colored frame to match the color tones used. The Dot Kareshi picture was done on a whim, but I kinda like it, so it will stay for a while. 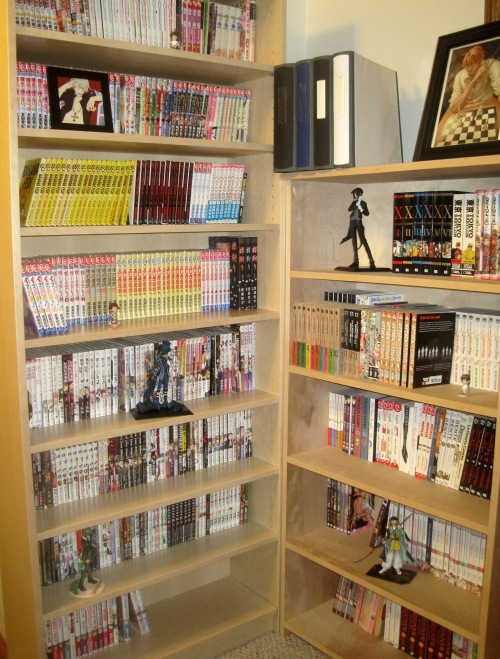 The bookcase on the left is the last new one. It has more shoujo manga, including Flowers, Zero-Sum, Blade/Avarus, and some B’s Log. There’s a Kouga Yun shelf, a Watase Yuu shelf, and Yoshida Akimi shelf. The bookcase on the right is now strictly English translated manga. There’s a print from In These Words on top (love oranges) and another Dot Kareshi picture.

So much space in these once very cramped shelves! I kept all my Tousuisha comics here and have a space for Aria, Feel Young, and other newer imprints that I just own a few books of, such as Itan, Spica, and Gene. There’s some space dedicated to josei, including my Kawachi Haruka and Katsuta Bun collections. I had a postcard Yuki Kaori postcard collection purchased cheaply years ago, so I put one on display. That’s going back to my manga roots, so it’s kinda fun. There’s also some Ono Natsume displayed. I like to have the top right shelves empty so I can stash new arrivals, books I’m thinking of reading next, and also stack oyaji manga that I’ve neglected to add to my lists. 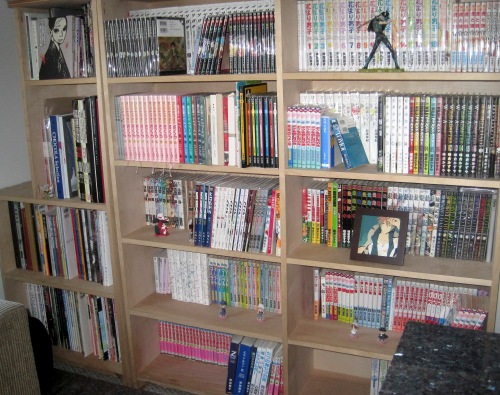 Another spacious spot. Most artbooks are on the far left. There’s several CLAMP shelves and the Yoshinaga Fumi collection is kinda hidden by the Ishikawa Chika and Hetalia manga. I guess I could move those. There’s also shelves for Minekura Kazuya, Takaguchi Satosumi, Kamio Yoko, and Hiwatari Saki. Towards the bottom is my Year 24 collection, with Hagio Moto, Aoike Yasuko, Takemiya Keiko (hidden by my desk), and just a little of Yamagishi Ryoko and Kihara Toshie.

I have 3 other bookcases I didn’t take pictures of, including my BL manga, some more specific author dedicated space, and a miscellaneous bookcase. I think you get the idea though–lots of space! It took lots of effort, but the end result is great. However, I’ve noticed a few mistakes that need fixed after looking at these pictures. Also, I actually packed away about 7 book boxes of manga previously, but I’m so happy with how things turned out that I’ll keep them stashed away. Most were older series that I’ve already read and there’s a number that I just don’t care for anymore, so I don’t miss them. Now, it’s so easy to find things again that I’m excited to dig in and read. I forgot I owned some of these books.

This entry was posted in Random. Bookmark the permalink.