Even with my extensive otome gaming lately, I’ve burned through a lot of manga in the past few weeks. So as planned, I picked up a number of new books, including a lot of May releases. 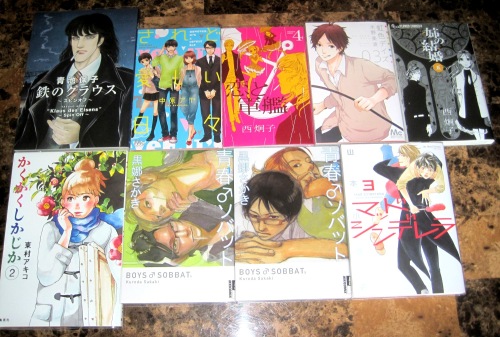 And the third photo because I gave up trying to cram them into the other sets:

I also picked up a Nishi Keiko artbook which came with a separate manga. Because I love her.

If that’s not enough to keep me busy this summer, I’ve also bought/pre-ordered several BL and otome games. I never really bother to cover BL/otoge other than AkaAka separately, so I’ll just make this a general purchases post.

On the otoge side, I recently bought Black Wolves Saga ~Last Hope~ for PSP. I also pre-ordered the special edition of Dot Kareshi -We’re 8-bit Lovers!- I Densetsu no Otome. The special edition comes with 5 postcards with bromide illustrations and a special booklet. The game has such a nice Nintendo-era stylized look and the characters are broken versions of your typical RPG characters. I’m stupidly excited for it, particularly the sadistic priest who will make you pray to him for healing. It will be released on 7/24. I just hope I’ll have time to finish it before the school years starts and I’m swamped. Damn you, Rejet! I’m a bit addicted to their games lately. 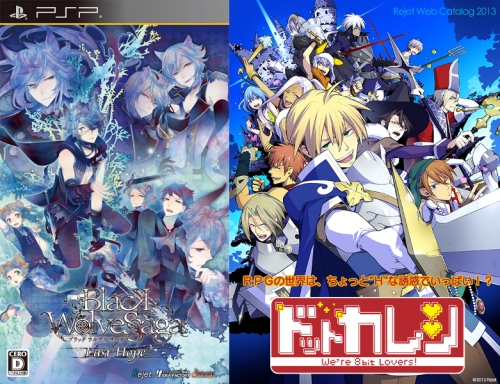 On the BL side, I ordered No, Thank You!!! which looks like some beautiful (and lusciously hairy) revolution to the BL game industry. There is a godly demo available for download on the website that contains the game’s introduction and selected naughty scenes. Interactive Text Hooker worked flawlessly with the demo. The character designs, the fun protagonist (who tops), the fantastic artwork, the game’s interface/customization, … jesus. It’s too perfect. No, Thank You!!! will be released 6/28. Soon, but not soon enough.

This entry was posted in Purchases and tagged purchases. Bookmark the permalink.