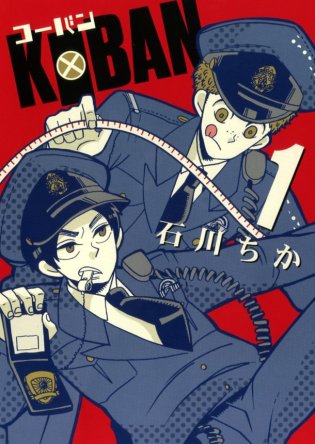 Koban is a simple, yet very entertaining series by Ishikawa Chika. I was first drawn to her eye-catching art style and boldly colored covers, but stayed for the fun and endearing characters. She might be my favorite new (to me) mangaka of this past year. So I’m going to introduce you (the whole three of you who might actually care about this type of manga, ha) to the police comedy, Koban.

Koban follows the exploits of two officers who man a small police branch. These branches are referred to as kouban (hence the title). They are not fully staffed police stations, but function like a satellite outpost within the community. Their duties involve contact with the locals, such as giving directions, taking reports, and responding to emergencies.

Takeda is the senior officer and a police sergeant. He’s incredibly smart and capable. His talents have lead him down an unprecedented, short path to promotion, but that’s not the only short thing…

Takeda is notoriously short, especially next to his very large partner.

Takeda is very serious, but has a bit of a difficult personality due to his insecurities. He’s quick to anger, but everyone is more than willing to push him there. Constantly. He could be labeled tsundere, but the “dere” is well hidden. Takeda is not good with children and they don’t take him seriously either. However, he’s (not so) secretly the person who wears the police mascot costume, Hiipo.

Mention Takeda’s Hiipo role to his face and you’ll likely get a gun drawn on you.

This is Sennami’s brain while he attempts to give directions.

Sennami isn’t completely useless at his job (only 95% of the time. 99.9% if you ask Takeda). He has a few moments of insight. Children like Sennami and he communicates well with foreigners. He has no foreign language ability, but uses his police training to read people and figure out what they want. He must have paid attention at some point during his training! This earns him some grudging respect from Takeda… at least until Sennami literally overlooks him again and needs disciplined.

Takeda and Sennami are basically an odd couple who are always at odds due to their differences in personality and height.

This illustration is a good summary of their differences.

Sennami is not very sensitive and teases Takeda, who is quick to push back. In the afterword, Ishikawa jokes that her mother doesn’t like Takeda and thinks he’s a bully who can’t take a joke. Well, as a fellow shorty, I love him at least!

Ishikawa’s humor is silly and simple, but skillfully delivered. It works well for me: it’s very visual and doesn’t rely on word puns that are often lost on me since I’m not fluent by any means.

Their height difference is most of the humor, yet I’m still amused.

If you’re interested in reading Koban, here’s all the information you need.

Koban was first published in Jump SQ and the original tankoub0n is out of print (far left). However, all contents are included in the recent release of volume #0 (middle), along with a short chapter from a previously published doujinshi. In addition, Koban #0 has furigana while the original does not. The new serialization starts with #1 (right) and is currently publishing in Spica. The story is episodic, so you could read these out of order and still follow along. All tankoubon are the large A5 size and have very vivid covers.

Overall, Koban is a very fun, light story with lively characters. It’s simply adorable and makes me laugh. I look forward to the next volume and am very excited about having a new mangaka to follow. 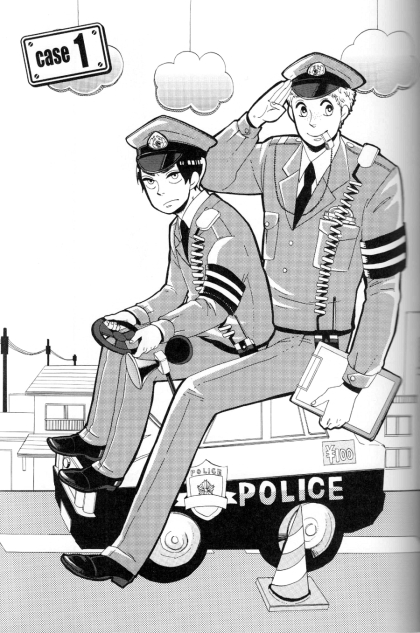 This entry was posted in Manga and tagged Ishikawa Chika, manga, shoujo. Bookmark the permalink.

11 responses to “Koban by Ishikawa Chika”