Here’s a late addition to the Oyaji Romance Manga Selections that I mentioned months ago: Ojikoi. While Ojikoi is available for free at Hana to Yume Online now, a print volume will be released this January! So to celebrate, here’s its official inauguration to the oyaji lovin’ list:

Ojikoi is a rare treat–it’s a shoujo manga that features a romance with an older man. While josei and BL have a dedicated and expanding oyaji niche, shoujo manga lags behind. But Ojikoi is a great start.

Sanjou Arashi (nicknamed “Ran-chan”) is a high school student who works part time at an agency that does private investigations and odd jobs. She’s quite serious and has a strong sense of responsibility that offsets her boss, Kageyama, a man seemingly more interested in goofing off and smoking than running the place.  Being a smart girl, Ran starts to notice that this isn’t quite true. The boss can be quite reliable and she’s drawn to the kindness hidden beneath his eccentricities.

Kageyama smokes, likes pachinko, and is quite messy. He runs his own small agency and while he’s immature and irresponsible at times, he does try to take care of Ran. If he doesn’t keep her out of trouble, he’ll at least pull her out of it after she finds trouble!

Kageyama is great at throwing out mixed signals. After sharing a brief, spontaneous, and chaste kiss, he acts like nothing is different, much to Ran’s frustration. However, when Ran takes his flippant offer to sit in his lap while watching fireworks, his composure is visibly shaken. Ran asked what his first name was and he replied that it was a secret and he’ll tell her once she becomes an adult. He likes being called “boss.” 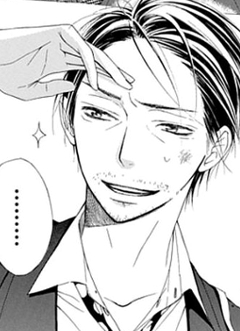 This entry was posted in Manga and tagged shoujo, Tsutsumi Kakeru. Bookmark the permalink.