Where do RPG heroes go when they die?

Bought on a whim due to a pretty cover and RPG story elements, Yuujin ga Yuusha (My Friend is a Hero) was a satisfyingly adorable manga by Chocodoughnuts. Yes, that is someone’s (tasty) pen name. It’s an enjoyable story for a reader who can appreciate a light-hearted old school JRPG parody.

The setting is back in the Dark Ages when the world lived in fear of the Demon King. That is until a Hero appeared who could save the world and its helpless people. The Hero gathered a party and seeks to bring love and justice to the troubled land.  But the world’s a dangerous place–there’s all sorts of monsters, traps, poisonous mushrooms… what happens when the Hero falls to any of these dangers?

Well, he dies and goes to heaven.

Up in heaven, Yuusha befriends a NPC who tends a flock of sheep. Being a NPC, he didn’t have a name until Yuusha dubbed him “Kai,” derived from the kanji of shepard. Since he’s a warrior, it looks like Yuusha’s intelligence stat isn’t well developed. Due to his dangerous task, Yuusha ends up visiting Kai fairly often. Although Kai would rather not see him die, he enjoys Yuusha’s company. Being a Hero, Yuusha is able to continously revive while he carries out his sacred task. But this often leaves his party to clean up a nasty mess. 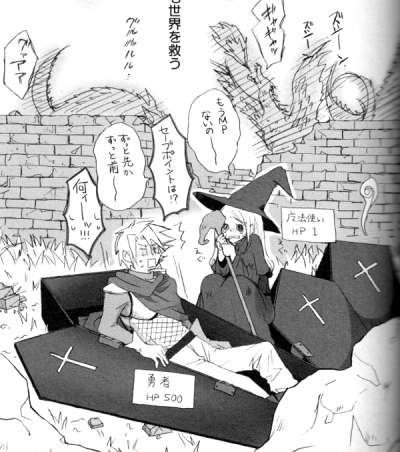 Being a party member is suffering, particularly if you’re poor Magic User.

Over time and many, many visits, Yuusha and Kai become close friends. Yuusha confides his fears and doubts (do you know how embarrassing it is to walk around with a cape and “Hero Hair” ™?!). Eventually, Yuusha tries to take the friendship further (). However, Kai is fairly shy, reserved, and a bit dense, so Yuusha is stonewalled at first. How will Yuusha ever get it on with Kai if the sheep are constantly watching?!

There’s that pesky CERO age rating to be wary of as well.

The party’s adventure comes to a climax when they confront the Demon King.

The Demon King taunts the party and is quite saucy and very tsundere. However, this is a RPG so he’s eventually defeated. Being a Hero, Yuusha reaches out to the defeated Demon King and uses his last strength to ease his pain.  But they’re both crushed by the crumbling castle anyway while the rest escape. 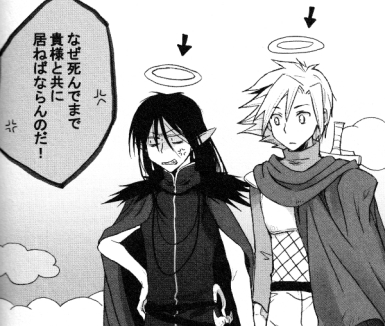 Demon King isn’t happy that he’s stuck with Yuusha, even in death.

Now that the last boss is defeated, does that mean the end of everything? What becomes of a Hero with no last boss left to conquer? What happens to Yuusha and Kai’s love story after the game is cleared? 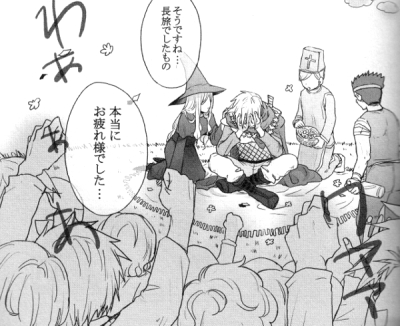 Yuusha’s bittersweet revival and victory celebration in the epilogue.

The art is very fluffy and I really enjoyed the premise which was simple in nature, but executed well. I can’t emphasize how cute this manga is, particularly to someone who doesn’t seek out and often actively avoids BL fluff. An extended preview is available on Chocodoughnut’s website (http://dntown.x.fc2.com/f1.html). The web pages are rough sketches and the linework in the final book is much more polished. It looks like extra panels and pages (including 3 color pages) were added to flesh out the story. The book is a worthy purchase if the preview catches your attention.

This entry was posted in Manga and tagged BL, Chocodoughnuts, manga. Bookmark the permalink.