Despite the arrival of summer, I’ve neglected things around here in favor of other shiny things.  Some of which include: 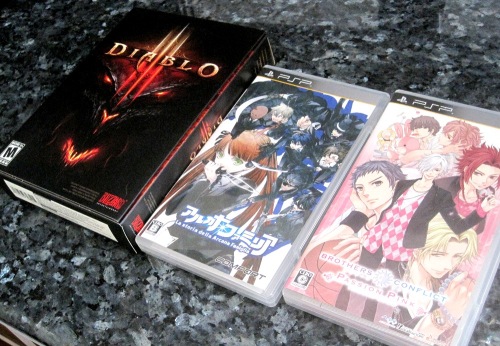 One of these things is not like the other.

Most attention has gone toward Diablo III which arrived exactly when I wanted a video game to binge on.  I’ve been running my wizard around like crazy. On the other hand, I’ve barely touched Brothers Conflict yet.  In due time.  If I manage to do it before I grab the Atelier Elkrone otome game.  It’s like my dirty little secret of wanting the Atelier games to be dating sims as well was heard.  … Fabulous.

I have been dabbling in manga and have received a number of them.

Caught up on Tousuisha manga purchases.  The reality of Silver Diamond ending is starting to set in. Volume 27 will be the last. I’ve been reading it continuously since.. 2004? There was a year in-between where I almost stopped reading manga, but Silver Diamond is the one thing I stayed current on.  It’s hard to imagine a manga world without Chigusa and Rakan. We’ll see where all the developments /revelations from this last volume go… I hope she doesn’t rip my heart out.

The rest of the new manga.. difficult to cram it all into frame.

I’ve been trying to chip away at them and can’t fixate my attention on just one to write up something about it.  Something from Monden Akiko (Limiter, a josei title), Almost Paradise (almost unnecessary? Matsuo Marta has no lack of fans..), Dakara Kaneda was Koi ga Dekinai, Brown Sugar, a number of things from my backlog.. being indecisive is resulting in a whole lot of nothing. I’ll have to make a concentrated effort to get back into the swing of things. 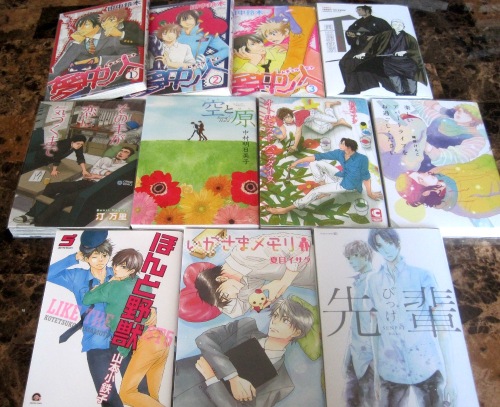 The BL manga from the pile

I’ve read 3 of the 4 books in the middle. Funny thing is they are all student/teacher stories and 2 are art teachers. Sora to Hara and Almost Paradise look great next to each other–so colorful!  Both were great reads. I was delighted at the surprise fantasy story in Almost Paradise. Fantasy is just not something I expected from Matsuo Marta. Nagisa Banri (Sono Te ga Koi ni Kizuku Made) has a refreshing style. It’s not classic BL beautiful bishie that’s done to death: the haircuts remind me a bit of Mentaiko. It has a decent story for a beginner.. dramatic with a touch of mystery. Sora to Hara came with fun stickers and Senpai came with a postcard.  I’ve gotten a number of nice postcards lately and wanted to do something with them… 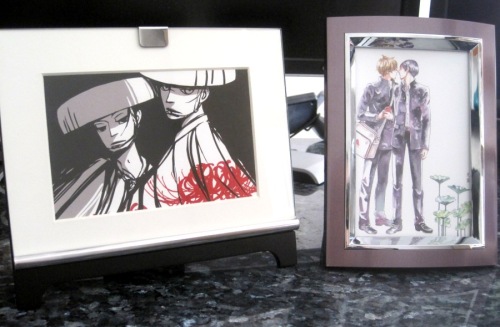 I think I’ve crossed some odd line.. oh well. Not sure about the photo frame for Senpai, but it was cheap and will work until I find something else. Still need a frame for the Faust postcard from Al to Neri to Sono Shuuhen so I can enshrine my oyaji love. The Ono Natsume stuff looks surprisingly great on the mantle. 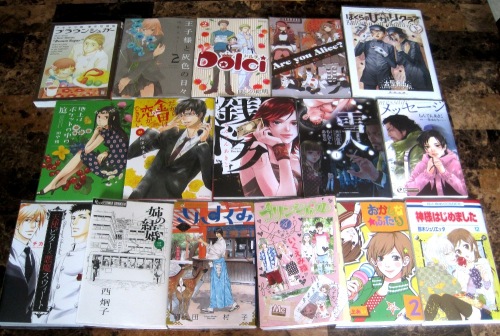 I’ve started to go through these. I think Nishi Keiko is conspiring to kill me with Ane no Kekkon. I’m not sure what direction the story is going to go from here. There’s just a little hint in the cover, which is so nice that I had to make it the new blog header image.

I’ve never seen anyone so happy to get smashed in the face. I’m surprised that I relate to Maki the most. I really want it to work out for him.. I don’t know if I’ll get what I want.

From Brown Sugar. I really like this book so far–almost half done. She has excellent oji-san taste. She’s crushed because she was just referred to as his daughter.

Scene from Chijou wa Pocket no Naka no Niwa. This has some gorgeous art. I haven’t had a chance to sit down and read it in earnest yet.

I usually don’t like pictures of bugs, but this one has a tea cup. This makes it okay.

& Volume 4 is coming out in about a week. That’s an instant auto-buy title, so I already placed a small-ish order. That will be my first order from honto. Yay?  After that, no more until mid-July.  I got enough crap to read!

This entry was posted in Purchases and tagged purchases. Bookmark the permalink.