Shodensha (publisher of Feel Comics) is releasing a new BL imprint entitled “on BLUE collection.”  After being colossally disappointed with gataeu, I was wary of trying another new BL imprint from a trusted, yet non-BL publisher–until I saw on BLUE’s initial lineup.  With seasoned, talented mangaka on board, I’m game.  Here’s some information about the first releases, taken from their website.  There’s more to come in August.

I can’t properly discuss this without practically frothing at the mouth, so we’ll say this title is on my “most wanted” list.  Especially after the heart attack I almost had while reading Hatarake, Kentauros!  Equus contains unique love stories between centaurs and humans.

Houkago no Fujun by Kajigaya Michiru

Mizutani was suddenly kissed by his classmate, Sawaki (?).  Afterwards, the two intensify their love behind closed doors.  This story is about a secret relationship between two high school boys.

Hrmm, I’m a bit more on the fence about this one.  New mangaka.  In general, I find fluffy high school shit boring, but the inside art looks good! 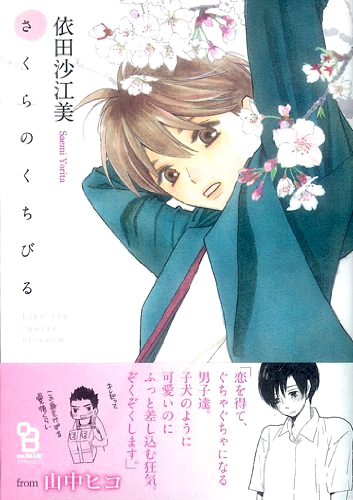 Kouya is violated by his once trusted cousin and their relationship becomes more and more twisted.

Twisted incest?  I’m there–I know she can write twisted stuff from her past stories.  Love the cover’s colors and textured look.

This is a collection of short stories about innocent, “vibrant” youth in an all boys high school.  What will be the outcome of love between a freshman and senior?  Also mentioned:  a beautiful upperclassmen who is forced into a relationship with a teacher and an older brother has to watch his younger brother fall in love with his own best friend.  In another preview image, one character states “If you remain by my side, I’ll attack you.”

Eeeeh.. this really is not my style.  The (likely blushing) younger boy getting “devoured” by his older classmate under the sakura trees with petals madly flying about.  The cover and plot could easily be swapped for Generic Shoujo Manga X.  Well then.  Between those impressions and the few Yorita Saemi works I’ve read before, I’m definitely passing this one up.

6 responses to “on BLUE collection – new BL imprint from Shodensha”