Mahoutsukai no Neko by Kikuta Yui

“If you’re going to die anyway, die protecting me.”

Kikuta Yui (Shounen Hakaryuudo) presents us another shoujo fantasy adventure in her newest work, Mahoutsukai no Neko.  This time, we even get cute black-haired boys on leashes that turn into cats.  Score!

Rio is a 14 year old boy with no particular special traits, except his burning love for books. He’s awkward and considered odd at best by his peers.  Rio also has a twin brother, Mao.  Although they look alike, they couldn’t be more different.  Mao is good at everything, popular, and has future plans to have a big, happy family.  Despite their differences, the brothers are close.

One day, when Rio attempts to retrieve a cat that wandered into the street, he is hit by a car right in front of his brother’s eyes.  Everything fades to black.  In the darkness, a voice offers a choice:  to live or to die.  Fading rapidly, Rio gives the obvious answer: to live!  Turns out this was quite the loaded proposition.

Rio awakens in a world filled with foreigners and strange animals he’s never seen before.  That’s not the only odd thing–Rio now has the form of a black cat!  He quickly learns cats are revered in this world because of their special role as familiars of wizards.

It’s a rather violent world as well.  The source of magician’s power is their heart and since magical ability is limited and something you’re born with, some wizards will devour the hearts of others to gain their power.  Because of this, Rio is soon preyed upon by another magician and his cat and is almost immediately disemboweled.  Yup, it’s kinda a violent shoujo manga with blood, severe wounds, and even decapitations, but it’s not drawn in a gory manner.  However, Rio doesn’t die yet, as their true goal was to flush out Rio’s own magician.  A beautiful, young, and elegant person appears and effortlessly saves him, but that image is quickly shattered.  The wizard is incredibly annoyed and angry at Rio for being so weak.

Taanist in a rare moment of not glaring or yelling

The magician Taanist is a mystery.  He’s a very powerful magic user.  Age is unknown and doesn’t align with his outer appearance.  Even Taanist’s gender is first presented as androynous, mostly to tease Rio.  However, Taanist is often referred to with gendered words like “kare,” suggesting male. Typically tsundere, we do get a few glances at Taanist’s softer side.  But not too many. 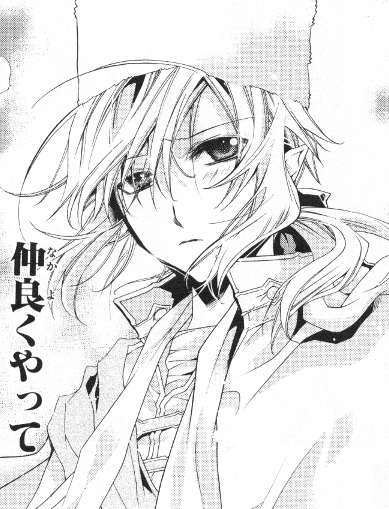 The banter between Rio and Taanist are the meat of the manga.  Cats are supposed to protect and fight for their wizards.  However, Rio is worthless and powerless and Taanist is quick to let him know this.  Having such a weak cat is a liability and they both try to hide this relationship.  There’s a serious power imbalance here (hence the leashes~) and poor Rio is completely out of his element.  Thankfully, for both him and us, Rio can take the form of both a cat and a boy and is always kept on a short leash!

Rio spends a lot of time either curled up in Taanist’s lap like a cat or chained to him like a dog…. shin approves.

Why did Rio become this powerful wizard’s familiar?  How is Rio supposed to be useful?  And just who is the magician Taanist and why does he seem to know Rio?  For that matter, why is Taanist so tsun tsun?!  As the story progresses, we find there’s a lot more to Rio, his brother, Taanist, and relationship between all of them than first imagined.

Just who is that guy on the left?! Taanist is so cute when he’s murderous~

Mahoutsukai no Neko is one of the more fun titles I’m reading from Zero-Sum/Ward magazines.   The explosive, yet sometimes sweet Taanist, the hapless Rio, all the crazy people who want a piece of their power… lots of entertaining things  going on.  It’s tasty shoujo fantasy junk food, so I greatly look forward to the following volumes.

This entry was posted in Manga and tagged Kikuta Yui, manga, shoujo. Bookmark the permalink.

3 responses to “Mahoutsukai no Neko by Kikuta Yui”