I’ve already dived face first into my new manga.  Since I won’t do individual posts for every title, I wanted to try some random snippets from works that I’ve recently read.  Feel free to chime in if you’ve read any of these, although refrain from spoilers if I haven’t finished it! No specific spoilers are given here–only short, general impressions and a couple fun images that will help me in my next purchasing round. 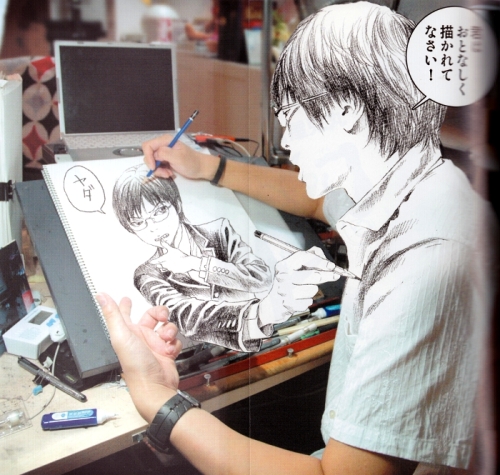 Furuya Usamaru locked in a struggle of wills with Picasso!

Wow, look at me buying shounen again.  I never really recovered from having my manga heart crushed by the cancellation of Hikaru no Go.  Picasso here has the ability to draw images representing people’s troubled hearts.  He can then use these drawings to dive into their heart and help them confront their issues.  Sounds kinda boring and cliche?  Maybe, until you realize the man behind the pen is Furuya Usamaru, who has drawn a number of excellent alternative and mature manga.  Furuya lends his talents to create imagery and symbolism that the shounen genre could only dream about.  Works like this remind you that manga is a formidable art medium.  You have to see it to believe it–and you should see it!!  I haven’t quite finished Volume 1 (of 3) yet.

These are thick books btw.  I thought the price was a bit high, but it turns out they are almost 300 pages long and have nice color foldouts like above.  Score!

Like all anthologies, this was a risk.  A risk you’re willing to take while on the high from playing the game (currently in beginning of October!).  Turns out, this anthology is pretty cute and entertaining.  Like a light manga snack.  All the guys get their “turn” and I surprisingly liked the Ken stories the most.  Very pleased with this purchase~

This manga is scanlated except the last chapter.  It all makes sense now. Sailor Fuku ni Onegai! fell apart at the end.  I honestly can think of only so many titles that actually have a good ending; I’m almost resigned to mediocre or poor endings, but there is a lower limit.  Without spoiling, just think clumsy cop-outs and gaping plot holes.  It didn’t help that I never really cared about the characters.  Except Kyuubi–I kinda liked him because he was so honest about being a man slut.  Tanaka Meca, please tell me you have something more in store for the ending of Faster than a Kiss.  I picked up this title because I was on a Kamisama Hajimemashita high and wanted more of a similar thing….. good thing I still have the rest of Karakuri Odette awaiting me!  (Have you read Suzuki Julietta’s works?!  ❤ <3)

Honestly, this boycandy is usually more than enough for me to enjoy something. Just don't fumble the ending so badly.

I like Zero-Sum.  I often tell people who claim shoujo is nothing but generic high school romances that they are just looking in the wrong place (and need to get their heads out of their asses depending upon mood :3).  A magazine like Zero-Sum offers a nice alternative.  But even within their works, there’s still generic titles and Makai Ouji is off to a rough start.  I wanted to chalk it up to inexperience, but now I see the author Takadono Madoka has a number of works already out.  So we’ll go with a slow start and boring characters.  Not sure if I’ll buy volume 2 when the time comes.

I am stunned by two things–what the hell happened to the art and this is the end?!  My manga heart is broken.. might do a bigger post on this series to remember the good times~

I’m an official Hiiragi Nozomu fangirl after Oyajina! and this is a pretty fun book.  Following the BL trend of bringing back the rejected guy, Nobunaga from Ijippari Yuugetai! gets his own oneshot in this book.  I was super excited. 😀

I haven’t read much of this one yet and might do a bit longer post once I do.  So let’s just stare at this frame.